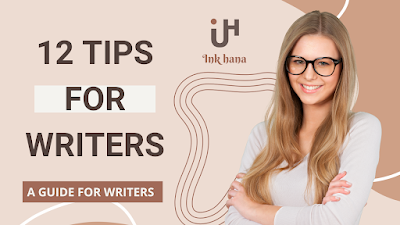 TIPS FOR WRITERS: 12 Tips for Writers: A Guide for Writers
1) Make your character's wealth and job match

Someone with an average job (teacher, accountant, etc.

Should not have a billion-dollar house.

Half a dozen of the most expensive cars ever.

A dozen maids, and designer clothes, unless they secretly run the mafia!

Please, If you're going to make your character rich, give them a rich job like a lawyer,

superstar, or CEO of a successful company.

2) Get your character names right.

You will not believe how annoying it is to see a name spelled one way on the first page and different on the second.

Instead of concentrating on the story, I start wondering which way the character's name is supposed to be spelled.

3) Don't rush. Okay, I'll admit, I don't always follow this rule, but it seriously bugs me when two people meet in the first chapter about how
The character's name should be and by the end, they're married. I mean, unless their werewolf soulmates are drunk or completely crazy.
Don't get them married in the same chapter as their meeting.
4) Make it realistic. Even if it's fantasy or whatever, please don't have your character bouncing during their death. I mean.
Who does that? Oh, hey, I'm going to die! *Bounces* Can I have ice cream?
Have you ever seen that? No. Most people going into their death are either.
a) shaking.
b) screaming.
Well, there's sleeping too, but whatever.
5) Make original titles, people. I'm serious. This has been ranted about multiple times.
but I am going to say it again.
If your story's titled 'OMG, One Direction is fighting over me, WTF?
No, I am not going to click on it. Firstly, who uses text talk in titles? Unless it's a book written completely in text, please don't. Second, gee.
I think I'm going to read a book where I already know the plot! Honestly, where's the fun in that?
It's the whole plot, in the title, it's oh-so-suspenseful. Feel free to note the heavy sarcasm.
Also, do try to avoid long titles. Titles that are a funny line or witty phrase work, but not are plot ’give-away-less.

Take 'I Sold Myself to the Devil for Vinyls… Pitiful,
I know by an author I'm currently too lazy to look up.
Yeah, it does give away a bit of the plot,

But it's interesting enough to make you want to click the little 'more' button next to the summary.
I even saw a title that was something like 'He Stole My Bra While.
I Was Washing His Car!' Pretty long and outrageous, but exciting.
Titles like 'I'm Pregnant with Justin Bieber's Child, and He Doesn't Know It!'
Aren't. I'm sorry, but there's really nothing funny or smart, it's just a statement. A fact.
Where's the fun in that? Huh, that half-rhymed.
6) POV Changes. Handle these carefully. Only change when it's completely necessary, please.
I've seen stories with POV changes every other sentence, and it made me want to tear my hair out,
it pretty much looked like this.
- Sasha's POV -
He grabbed my hand and pulled me closer.
- Tom's POV -
She's so beautiful, I think I'm in heaven.
-Sasha's POV-
We continued walking down the trail.
-Mysterious POV-
Mysterious, they don't know I'm watching them.
Did that not just drive you insane? I'm sorry, but honestly,
if you change POVs enough to make me forget whose head I'm in,
just write in Third Person.
And if you are going to use POV changes, please limit it to two per chapter.
7) Lyrics. Should not take up a whole two pages. If there's a lot of stuff between the lyrics, fine.
But when it's just lyrics… I'm sorry, and no offense, but I think I might hit you with a chair.
8) Guy's POV.
This really bothers some people rock at it, but when you don't, it just falls. I'm not saying.
I'm great at Guy's POV,
I actually suck at it, but that's why I avoid it. Not only that, but I absolutely hate it.
When from the girl MC's POV, the guy's arrogant, confident, mature, and masculine,
And when you switch, he sounds like a whiny, five-year-old girl that wants candy.
It bugs me too when the guy is Toto layer. I don't think every guy goes around putting girls on.
Their 'hit list'. I mean, sure, maybe they have a perverted thought occasionally,
but honestly, when it's nothing but… *Facepalms*
If you're going to write a Guy's POV, make it realistic. Heck, interview a bunch of guys if you have to, just please make it believable.
If you can't do it. Write in Third POV or don't switch or something.
9) Reactions
Character reactions are huge. It sets how important a certain event is. If the character brushes it off and doesn't think about it, and there isn't some 'I have a bad feeling about this,
but it's probably my imagination, the readers won't pay much attention to it. If the character freaks out about it, it'll seem big.
I'll take a half example from my story, Something about Summer
DON'T READ THIS IF YOU'RE PLANNING ON READING SAS OR IF YOU ARE IN THE MIDDLE OF READING IT,

somewhat of a spoiler) (Also, I'm using an example from my own story because I know what I intended with my story and if I use someone else's, and it's not what they intended… awkward):

Raine and Kaden are dating. They're at the mall, and Kaden's staring at some girl's butt.

Definitely not ideal for a boyfriend to do, right? But Raine barely reacts, which makes it seem pretty small.

However, if she had gotten mad at him, and made an argument that lasted three days, it would've been huge.

It's still the same thing. It's just different from how the characters would've reacted to it.
It also sets the character tones.
10) Reactions & actions should match the character's personality & vice versa

This is somewhat related to #9. Using the previous example (the boyfriend staring at a girl's butt thing), if option two had happened (the big reaction),

Rhine could've come off as the uptight girl that overreacts. Which really isn't her.

Your characters should match their personality.

If you say your character is very easy-going and down to earth, then have them freak out about someone they've met once forgetting their name,

Or, if you say your character is nice, mellow, and sweet, Then have them mock
or insult someone, it just wouldn't fit.
And if your character's a tomboy rebel but spends five paragraphs wondering
if her/his hair looks okay and worrying about class, it doesn't make sense.

This seems like common sense, but I've wanted to throw something so many times.
From reading a book where the actions/reactions of a character do not match
what their personality is said to be.

One thing I hate is when we suddenly know everything. It feels too coincidental. Yes, we want information.

But we don't want to find out everything about your character's scarring past in the first chapter.

Break it up, draw it out. Give a little info here, then wait a couple of chapters.

It's just weird when by the end of the first chapter we know everything about your main character.

Also, half the time, it comes off as too much explaining. Small reasoning here and there is fine,

but they shouldn't be there every two lines. Don't explain every inside joke.
Don't explain every reason behind a phrase or action.
It's exhausting and not really necessary.
Plus, when people explain stuff they don't want to explain in real life.
There are a bunch of attempted subject changes and 'Um's, it's not smooth.
And when they ramble, they stall, they slip in a bunch of stuff that's irrelevant.
Real explanations are filled with phrases like
'It's just 'it's hard to explain' and 'oh my god' and stuff like that.
Tip: When writing an explanation, try reading it out loud. See where you automatically pause.
And where/if you slip in anything. See if it sounds natural and if it flows.
12) Character Development

Okay, this might just be me, but I think a character should develop during a story. Like.
Maybe they're immature and silly at the beginning, but then something bad happens.
And they become all hard and cold. Or vice versa.

But characters should also develop at a reasonable pace. If the character did the above in a chapter,
it'd be a bit weird. Even if something bad happened. Old habits are hard to break.

A player can't exactly become the perfect boyfriend in two chapters, he's still going to look
at other girls, and make perverted comments and such.

A nerd won't act like a Queen-Bee girl perfectly.
Even if her acting abilities are stellar. There will still be little slip-ups.
I hate it when a character changes way too quickly and becomes a completely different person.
To me, it just doesn't make sense. We all have the things we don't mean to do.
Like, I always tell myself to stop being sarcastic, but never really succeed/
Because it's almost like an automatic reaction.
Your characters should be the same.
And that’s all for today thank you for reading to the end.